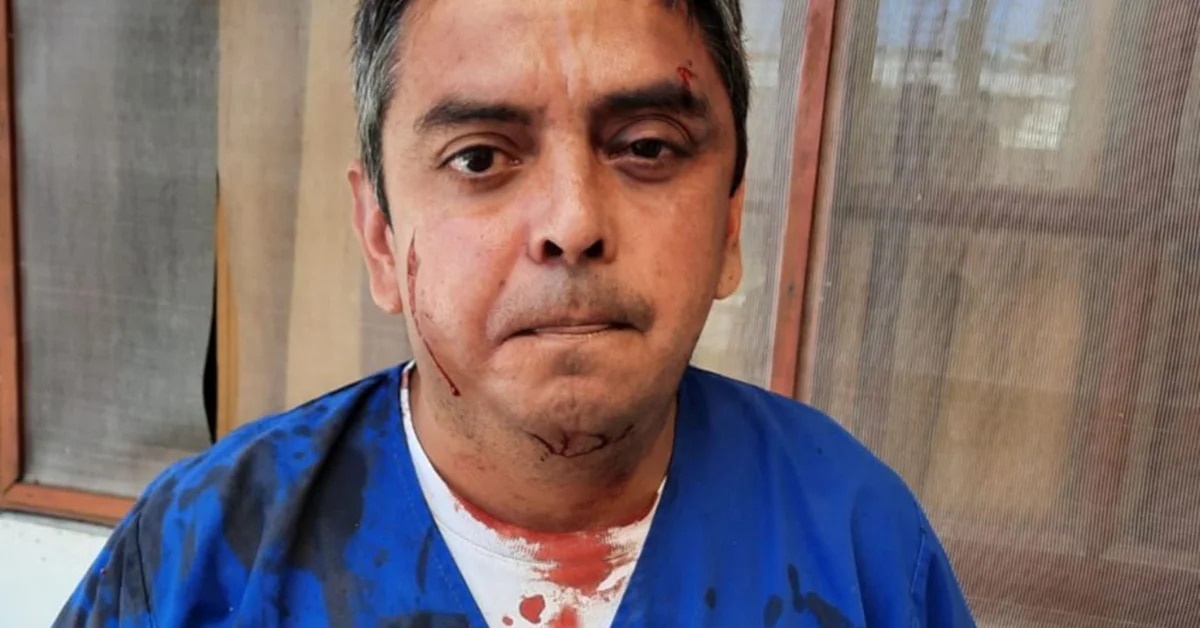 A man assaulted the Secretary of Health of General Lavalle: he blames him because he was infected with COVID

A new attack against health personnel was registered this afternoon in the country and the scene was the municipality of General Lavalle, in the province of Buenos Aires. This time A man who reported having been infected with coronavirus at the local Sagrado Corazón de Jesús Hospital held the authorities responsible and punched the Marcelo Cachagua (51), Local Health Secretary.

The fact was confirmed by the municipality itself. “This afternoon, the Secretary of Health Marcelo Cachagua was attacked with fist blows by a man identified as Diego Cafardo who caused injuries to his face ”, detailed the official website of the city.

As confirmed to Infobae sources investigating the case, everything happened after a meeting that Cachagua had with Melina Adauto, hospital nurse and wife of the assailant. As he left the office, the official ran into Cafardo, who asked him: “Do you remember me?”. Cachagua replied that he did not remember it and asked him what he needed. At that time, the aggressor He punched the Secretary of Health with his fist, pushing him and making him fall to the ground, where he continued beating.

“I almost died because of you!”Cafardo yelled as he hit the man. Then he threatened him: “I don’t want to see you here in Lavalle anymore. The next time I see you, I’m going to kill you. “. By the way, Cachagua denounced his attacker for minor injuries and threats.

Assisted by a person, the official managed to find his attacker on the public highway minutes later. “You want more son of a bitch? Every time I see you in town I’m going to keep hitting you, I’m going to screw you up, killing you “shouted the aggressor, who was later detained by the local police.

In the municipal statement, meanwhile, it is assured that “the person responsible at the local level of the health area was rebuked and attacked at the door of the Municipal Hospital Sagrado Corazón de Jesús.”

The reason for the aggression is a complaint made by Cafardo (49): He maintains that he was infected with coronavirus months ago inside the Hospital. The man had undergone a cardiac intervention in another locality and the doctors advised him to rest for a day, for control, in the General Lavalle hospital.

From that moment, the man holds the hierarchical staff of the Municipal Hospital Sagrado Corazón de Jesús responsible for an alleged intra-hospital infection. “In fact, he made a criminal complaint against the commune for what happened, which was dismissed by the Dolores justice,” the municipality’s statement said. In this sense, as this media was able to find out, the complaint was made in June 2021 and was dismissed in less than a month.

In turn, the official website of General Lavalle specifies that after Cafardo’s beating attack at noon this day, “the legal department of the municipality was working to file a criminal complaint and request restrictive measures so that it could not approach the places in where Cachagua performs tasks ”.

The aggressor is the husband of one of the hospital nurses

“In May of last year, the man was admitted to the hospital for control after a cardiac intervention and after that he began with symptoms and He held us responsible for having been infected. So much so that he made the criminal complaint against the hospital, which was dismissed at the Dolores Prosecutor’s Office, “said the Secretary of Health.

“His wife is a nurse in the hospital And today I cited her for a situation that occurred particularly in the nursing home, to resolve it and see what had happened. I ended up on good terms with her and when I left to go home, this man came up to me and asked me: ‘Do you remember who I am?’ And the truth is that I never cared for him, I never had a doctor-patient relationship with him. ‘No, I really don’t know who you are,’ I said. And I approached as I approach anyone who consults me because I think they have a problem or want me to help them solve an issue and directly hit me with a pineapple in the face. I stumbled and fell to the floor and he kept hitting me on the floor”, Cachagua explained in dialogue with the channel TN.

“He made the complaint and they dismissed it. If Justice did that, it is because there is absolutely no proof. We are in a pandemic and the possibility of a person getting COVID-19 can happen anywhere, “said the health professional.

He then reflected on the situation: “All people are tired of this issue of the pandemic but they forget that The health personnel are the ones who have led the pandemic, we took the pandemic on our shoulders and today we are the most punished by these people who consider that we are guilty or responsible for what happens to them”.

Regarding the complaint he made at the local police station, he said: “We are going to continue because these things cannot happen to us, less in circumstances in which people are tired. Imagine that at all times and at all times we are extremely exposed to the virus and our colleagues have died”.

Unstoppable COVID: 131,082 new infections in Argentina, the second highest record in the entire pandemic
Video: a woman mistreated a girl when she asked for a health pass in La Plata
After the attack on a doctor at the Santojanni Hospital, they announce a stoppage in testing centers of the City