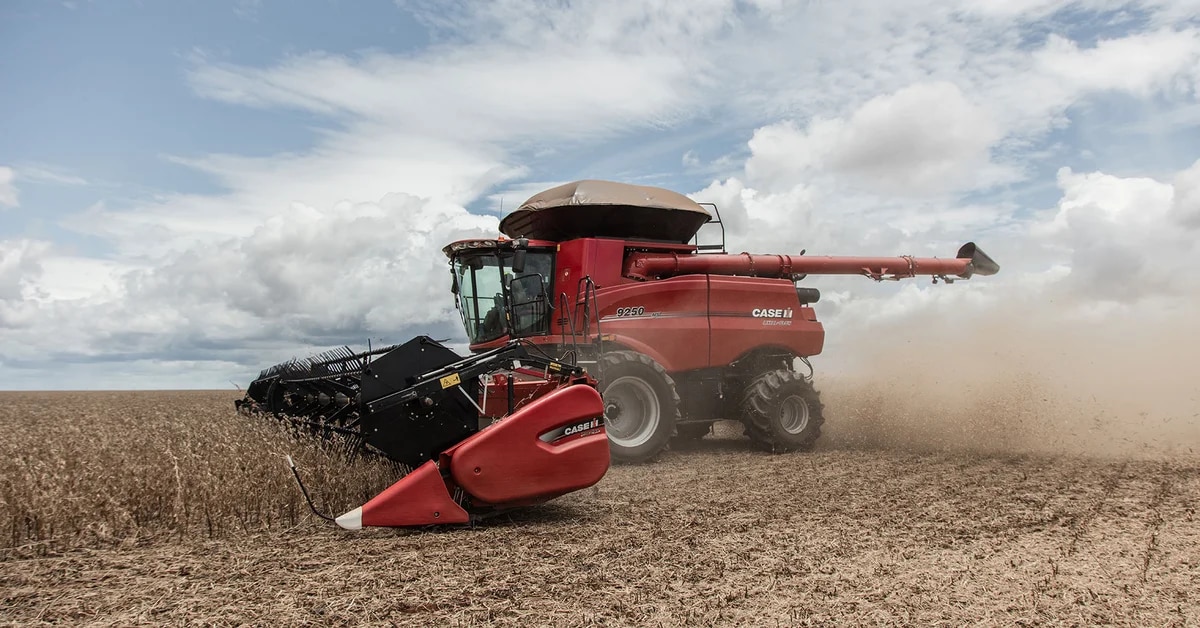 A harvester with artificial intelligence arrives that provides 15% more productivity

They launch a new combine harvester on the market (Credit: Case Press)

Agriculture, especially that related to the production of grains, has started for decades a process of professionalization, modernization and development of new technologies that has led the activity to a level of efficiency never seen before. That is why the design of a roadmap for crops and the correct adoption of the tools becomes the great difference between having a successful campaign or paying the consequences of errors in production.

Too many are these variables that must be taken into account: genetics, the technological package used, planning to cope with the climate and the machinery used, among others. This last point is the main one when it comes to ensuring efficiency in the work and maximizing the productivity of a field. Thus, the metalworking industry dedicated to agriculture is positioned as one of the keys for the producer and technological development and research to maximize its functions leads companies to offer increasingly innovative machinery.

That is why Case IH took these concepts further and launched the Axial-Flow 250 series of combines, the first with artificial intelligence that has the ability to automate 86% of its processes to find the optimal point and deliver more. productivity, better grain quality and less losses. In fact, the degree of efficiency reached by this new thresher in its four harvesting options is such that it gives the farmer 15% more productivity.

The brand new Axial-Flow 250 series, which has the 7250, 8250 and 9250 models, which are produced at the Case IH factory in the Cordoba town of Ferreira, have up to 55 horsepower more than previous models, new transmission automatic, a more comfortable cabin and greater efficiency with Automation technology, although the most important and remarkable thing about this combine is the artificial intelligence system it has.

In dialogue with Infobae, Case IH’s Product Marketing Director for Latin America, Rodrigo Alandia, said that this innovation in the combine “was born with the main objective of increasing the productivity of the machine and, mainly, that it manages to deliver, apart from productivity, less grain loss and higher quality thereof.”

They ensure that 86% of the machine’s operations are automated and that means that it can have up to 15% more productivity (Credit: Case Press)

As explained by Alandia, the harvesting process in the same batch presents a number of variables that make it “humanly impossible” to have all the regulated or adequate systems in place in such a way that it achieves “harvest perfection” and that is why that the artificial intelligence system AFS Harvest Command Automation has 16 sensors distributed in the different systems of the machine that adjust the performance of the combine so that “it can deliver its full potential.”

A) Yes, “86% of the operations of the machine are automated and that means that it can have up to 15% more productivity and makes the operator worry only that the grain tank is full, go to the hopper and unload. The Axion-Flow 250 takes care of everything else. In addition to artificial intelligence, there is the concept of ‘machine learning’ also included. It is a machine that as it harvests, it learns and that infinity of data generated every minute is used to adapt itself better and better ”, highlighted Alianda.

As previously mentioned, the American Case HI combine has the particularity of having artificial intelligence, giving the machine the power to adapt to the different harvesting strategies that the producer wants to carry out. They also work under the concept of machine learning, so they basically learn to improve their work.

All these automation processes can be divided into four harvest strategies, according to the needs of the producer or the particularities of the territories to work. These four options are: grain quality, maximum yield, fixed yield or balanced yield.

In the case of threshing with the modality of grain quality It is a strategy used by seed producers, so the machine adjusts its harvest speed, the adjustment of the washers, the rotations of the rotor and the speed of the fan, among other things. I mean, “Adjusts the variables of the industrial system to achieve the objective”, detailed Alianda.

They project a productive leap that will be generated by the new combine with artificial intelligence. (REUTERS / Agustín Marcarián)

Then comes the modality peak performance, which is ideal for those producers who are with short harvest times and need to explore the maximum yield. From this, the combine will go to the higher speed possible, “keeping the parameters of loss and qualities at an acceptable level”.

The third strategy that this smart combine has as an option is that of fixed yield, which works with a stable operational field capacity producing a number x of hectares per hour in a stable way, while the fourth corresponds to the balanced performance, with all parameters in average values.