Do you know Georgia O’Keeffe? You have undoubtedly seen some of its flowers or its landscapes in group exhibitions. This figure of American art of the twentieth century is however very little represented in European collections and is little exposed on this side of the Atlantic. The Center Pompidou is dedicating a beautiful retrospective to him, the first in France (until December 6, 2021).

Daughter of modest farmers, Georgia O’Keeffe (1887-1886) grew up in the great plains of the Midwest which leave a lasting mark on her, giving her a taste for nature and the great outdoors. She trained at the Art Institute of Chicago then at the Art Students League in New York.

“Chicago is the American capital of art nouveau”, underlines Didier Ottinger, deputy director of the National Museum of Modern Art and curator of the exhibition. Georgia o’keeffe “will retain the inspiration marked by its reference to nature”, and in particular the pattern of the spiral, “attention to the living and to the phenomenon of growth”. In American art schools, at the time, we did not talk about the creation of European avant-garde. 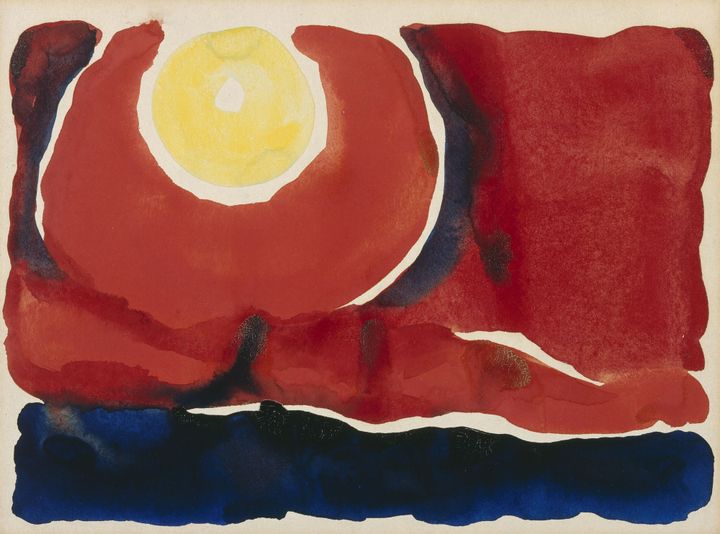 The exhibition opens with an evocation of gallery 291, a decisive place for her, where she first comes into contact with modern art. Its founder Alfred Stieglitz exhibited American photographers there and he was also the first to show Picasso, Cézanne, Matisse. It also publishes a journal, Camera Work, who publishes essays on these artists. In 1908 Georgia O’Keeffe discovered Rodin’s drawings and watercolors at gallery 291.

This is also where Georgia O’Keeffe will begin to be recognized. “The story is quite romantic, quite extraordinary”, says Didier Ottinger. “One day she decides to create an art totally independent of all the models she has been confronted with until then. In a few days, in a state of creative fever, she produces a series of drawings.” One of these abstract charcoals inspired by the shapes of nature is exhibited in this first room of the exhibition.

In 1916, one of her friends took them to gallery 291. Alfred Stieglitz was fascinated. “What he can appreciate in these drawings is that they are free from any modern influence, even European. He sees there a creation that he has always been waiting for, an authentically American creation.”, says Didier Ottinger. He immediately exposes them, without informing her, which infuriates her. She asks him to unhook them, which he refuses. His career is launched. 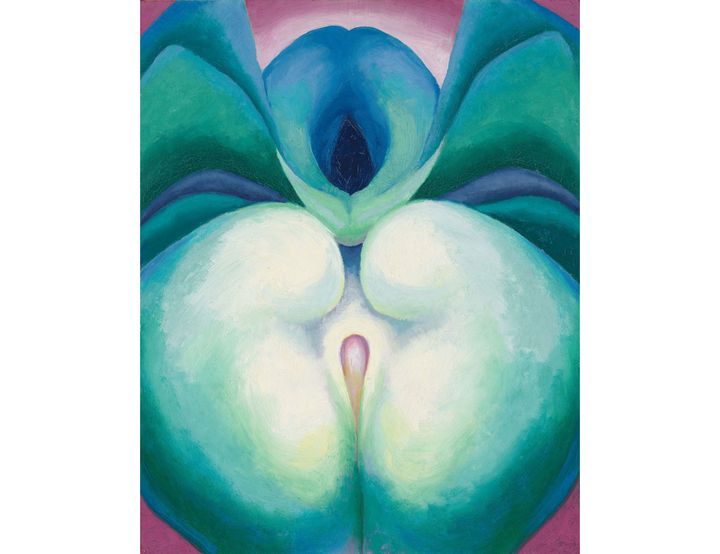 An epistolary relationship then begins between Alfred Stieglitz and Georgia O’Keeffe who earns her living teaching in South Carolina. He invited her to come and live in New York in 1918 and offered to provide for her needs for a year, so that she could devote herself to her art. A passion then began between them that lasted thirty years, until Stieglitz’s death.

O’Keeffe began to paint in oils the same kind of abstract forms as in his drawings. She quickly became a scandalous figure in New York, when Stieglitez exhibited in 1921 photographs in which she posed nude. Criticism is unleashed again in 1923 when she shows paintings evoking a female sex, even if she tries to refute this interpretation of her works which she considers reductive. “Nevertheless, it is obvious, without having a particularly badly turned mind, it is clear that the eroticism is one of the essential keys, not only of this series of tables but in a general way of the work of Georgia O ‘Keeffe “, comments Didier Ottinger.

From 1924, O’Keeffe painted flowers, which made her famous and are among her best known works. Lush flowers in bright colors characterized by close-up frames that take up the entire space of the canvas. She also produced abstract landscapes inspired by those of Lake George, in the upstate of New York, where she spent long months in the resort of Alfred Stieglitz. 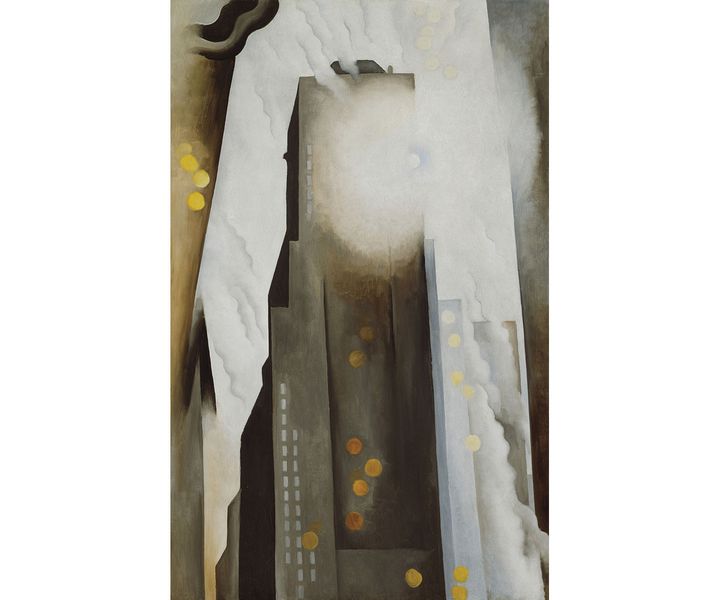 “His method proceeds from a movement of abstraction but it is never pure abstraction”, comments Didier Ottinger. “Georgia O’Keeffe is still, and she asserts it, an artist who has her feet on the ground. She wants to remain attached to the reality of her sensations, of her visions. She produces works that are an interpretation, a decantation of patterns she has in front of her. “ Even his painting Black Abstraction, which seems totally abstract, is inspired by a vision in a state of anesthesia during a surgical operation.

You have to see her astonishing New York buildings, seen from above or from a low angle, from angles comparable to those of modern photographers, where she introduces pellets of light that could be found in a photograph facing the sun.

The shock of his life was the discovery of New Mexico in 1929, with its wide open spaces, its sky and its light. From then on, she spent six months a year there. As in other places, “she needs to tame it. First she appropriates it by representing it in a fairly realistic way, and then she will transform it, make it her own”, remarks Didier Ottinger. She paints reliefs that resemble bodies. After attending ceremonies of the Hopi Indians, she creates an abstract canvas inspired by movements, music and what she felt.

“At Georgia O’Keeffe, we are on the side of effusion, sensation, empathy”, explains the commissioner. 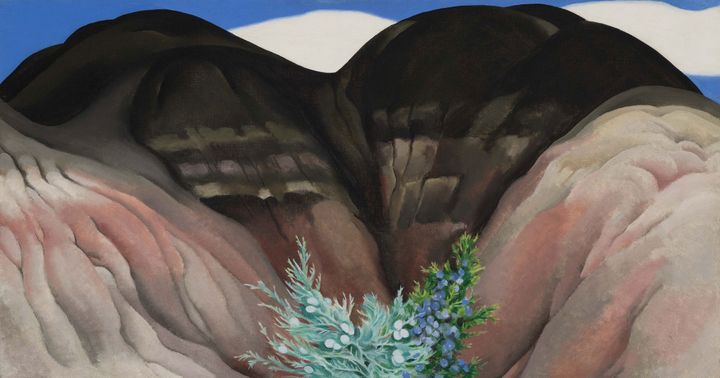 After the death of Stieglitz, she undertakes trips and the view from the plane makes her see the earth and the cosmos in a different way. She then paints rivers seen from the porthole, skies above the clouds. In the 1950s, she also painted the patio of her house and its door, which she simplified to the extreme in about twenty canvases which once again appeared abstract, and which announced American minimalism.

The artist is capable of a great revival in the 1950s. “This is what characterizes her work and makes it a great work of the twentieth century. She is never confined to a style or an iconography. She is always on the lookout for new subjects and ways to review all the data of her. artwork”, this Didier Ottinger.

Georgia O’Keeffe is very famous in the United States, she was the first woman exhibited at the Museum of Modern Art in New York in 1929 and had the consecration with a retrospective in 1943 in Chicago, then at the same MoMA in 1946. She was ignored in Europe, like many female artists and more broadly the American artists of before 1945. This exhibition is the occasion to discover it in all its diversity. 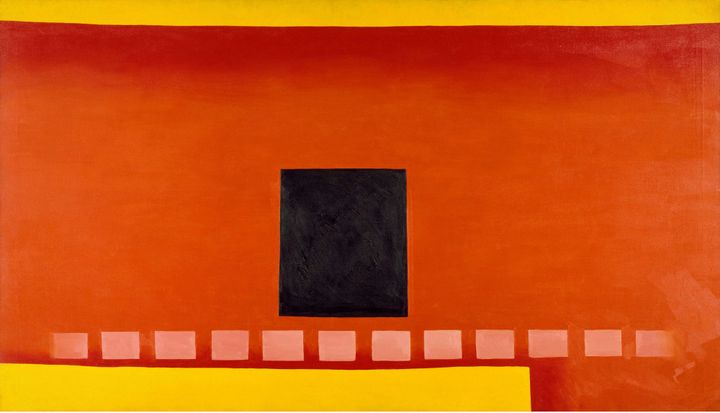