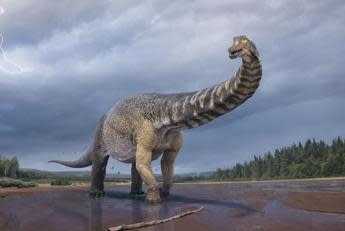 A new, gigantic, dinosaur has been classified in Australia. Australotitan cooperensis or ‘southern titan’ is the largest dinosaur ever found in Australia and among the 15 largest in the world. Nicknamed Cooper, from the place of his discovery, he was an immense vegetarian sauropod 6.5 meters tall and 30 meters long, practically like a “basketball court”. These animals lived in the Cretaceous, about 92-96 million years ago.

The first bones of the immense skeleton, says the BBC, were discovered in 2007 on a farm in the southwestern Australian state of Queensland, near the Cooper Creek River. To find them was the son of the owners, Robyn and Stuart Mackenzie, passionate researchers of dinosaur remains. Subsequent excavations led to the discovery of other bones of this animal which had four legs as large as pillars, a long tail and a long neck with a relatively small head. Experts paleontologists then worked for years to identify the dinosaur, finally concluding that it is a species never found before.