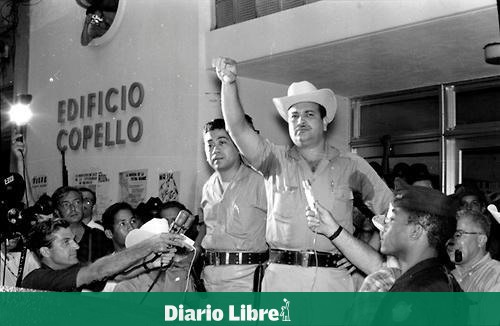 A day like today the US intervention occurred in the DR

On a day like today, but in 1965, the military intervention of the United States in the Dominican Republic took place, an event that had as a precedent the civic-military uprising of April 24, 1965, which sought to replace the government of the late professor John Bosch who had been overthrown in September 1963.

That April 28, four days after the civic-military insurrection began, US troops landed under the pretext of saving lives, but the real reason was to prevent Bosch’s return and the emergence of a communist-style government in the country, similar to the Cuban

In a consultation meeting of the ministers of Foreign Affairs of the Organization of American States (OAS) on May 1, 1965, it was approved to legalize the North American intervention with the name of Inter-American Peace Force (FID).

The bulk of the troops were from the United States: 42,000 Marines belonging to its 82nd Airborne Division, under the command of Bruce Palmer, considered at the time one of the best generals in the Pentagon.

The interventionists isolated the constitutionalistsdividing the city into two zones and installed a government headed by General Antonio Imbert Barreras, which was called from “National Reconstruction”.

The intervening troops and the constitutionalists they sustained numerous combats, the most notorious being the events of June 15 and 16, 1965 when the invaders tried to take the Constitutionalist Zone by assault and were repelled by troops loyal to President Francisco Alberto Caamaño Deñó.

Fighting continued until August 31, 1965 when a truce was declared and peacekeeping operations were handed over to Brazilian troops.

The United States troops remained in the country until 1966, when Joaquín Balaguer assumed the Presidency of the Republic, who had won highly contested elections over Professor Bosch, who was nominated by the Dominican Revolutionary Party (PRD).

Balaguer received power from the hands of Héctor García Godoy, who replaced Colonel Caamaño on September 3, 1965, as part of the agreements to end the conflict, which cost the lives of more than five thousand Dominicans, mostly civilians.

Leading newspaper in the Dominican Republic focused on general news and innovative journalism.