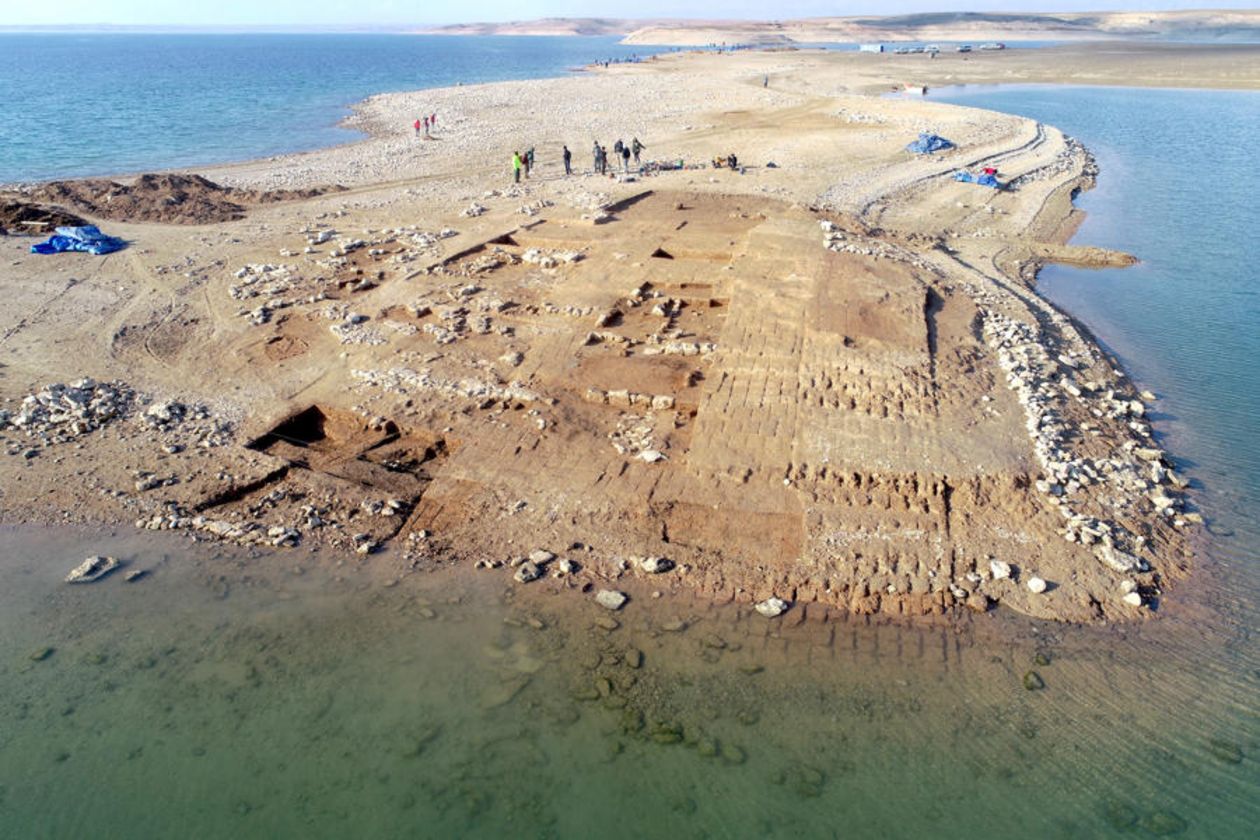 Heat waves follow one another, setting new temperature records, always earlier in the year. Drinking water levels across the world are falling, even as we fear rising sea levels. Droughts are inexorably rampant. In this context of acute climate crisis, extraordinary discoveries can occur. Recently, an international team of researchers unearthed an entire 3,400-year-old city in Iraq, one of the countries most affected by this lack of water. Indeed, the level of the Tigris has dropped considerably lately, and the city has thus emerged from the waters of the Mosul reservoir. It includes a palace and several large buildings. This fortuitous discovery will expand knowledge about one of the least studied empires of the ancient Near East, the Mittani kingdom.

As in 2018, the drought that is hitting Iraq this year is extremely intense: livestock are dying of thirst, crops are more than ever under water pressure. On the one hand to avoid too great an economic loss and on the other hand to provide drinking water to the population, since December 2021, the authorities have been drawing from the Mosul reservoir. It is the largest reservoir of fresh water in Iraq.

As a result, this significant demand led to a record drop in the level of the reservoir. German archaeologists from the universities of Tübingen and Freiburg, as well as the Kurdistan Archeology Organization, then exhumed the ruins of a Bronze Age palace, located in Kemune, on the eastern shores of the Tiger. Until last year, the building remained submerged. According to scholars, it dates from the time of the Mittani Empire, which ruled northern Mesopotamia and part of Syria in the 16th and 14th centuries BC. J.-C.

It should be noted that this city was submerged decades ago without any prior archaeological investigation, following the construction of a dam, despite the contemporary occupation of this area until 1985. This dam, built at the Saddam Hussein’s era (in the 1990s), located about 50 kilometers from Mosul, provides water and electricity to most of the region. However, it is considered by Westerners as the “most dangerous dam in the world”. Built on unstable foundations, the structure requires maintenance work and represents a real danger if it were to break. Experts estimate that, in the worst-case scenario, such a rupture could release a wave 20 meters high over the city of Mosul, with considerable loss of life and material damage in a few days or even hours. This is what almost happened in 2016, before restoration work costing more than 530 million US dollars.

Then, in the fall of 2018, the receding waters – in a climatic and meteorological context similar to today – in the reservoir of the Mosul dam unexpectedly revealed the remains of the ancient city of Zakhiku, in the region from Iraqi Kurdistan, an important site of the Mittani Empire (c. 1550-1350 BC). Recently, the same phenomenon has taken place, allowing a new examination of the area, and the revelation of precious knowledge about this ancient kingdom.

Parts of this imposing urban complex had to be exhumed and documented as quickly as possible, before it was submerged again. This is why the Kurdish archaeologist Dr Hasan A. Qasim, director of the Kurdistan Archeology Organization (KAO), accompanied by the German archaeologists Ivana Puljiz (University of Fribourg) and Peter Pfälzner (University of Tübingen), decided to undertake a joint salvage excavation, between January and February 2022, in cooperation with the Dohuk Department of Antiquities.

In a short time, the researchers managed to reconstruct a large part of the city plan. In addition to a palace, recorded during the first excavation campaign in 2018, several other large buildings were discovered: a massive fortification with a wall and towers, a monumental multi-storey warehouse and an industrial complex. The palace is located just twenty meters from the eastern bank of the Tigris. It is supported by brick walls more than two meters thick and is up to seven meters high.

Faced with this sprawling urban structure, Ivana Puljiz explains in a press release: “ The huge warehouse building is of particular significance, as it must have held huge amounts of goods that probably came from all over the region ».

Very well preserved remains and clues to the Mittani Empire

What is particularly astonishing is the state of conservation of the walls of these buildings – adobe structures – after centuries under the sand and then more than 40 years under water, according to the research team. The reason is that the city was founded around 1350 BCE and then destroyed in an earthquake. The subsequent collapse of the upper parts of the walls buried the buildings, protecting them from the ravages of time.

In addition, one of the main discoveries is that of five ceramic pots in which more than 100 cuneiform tablets – the oldest after the Egyptian hieroglyphs – have been preserved. These tablets date from the Middle Assyrian period, shortly after the earthquake disaster that struck the city. Some clay tablets, believed to be letters by researchers, are still in their clay casings. Archaeologists hope that this find will provide important information about the end of the city of Zakhiku, as well as the beginning of Assyrian rule in this region.

Indeed, these tablets could shed invaluable light on the functioning of society, the economy and the politics of the Mittani civilization. Not to mention that information on palaces from this period, so far, comes only from Tell Brak in Syria and the cities of Nuzi and Alalakh, both located on the outskirts of the empire. Even the capital of the Mittani empire has still not been identified with certainty.

Archaeologists all the same agree on the fact that the Mitannian kings, with Indian names — the first known is Kirta (between 1550 and 1530 BC) — were alternately enemies and allies of the pharaohs, including Amenophis III and Akhenaten. It is believed that the kings of Mittani gave their daughters in marriage to the kings of Egypt and corresponded with them. Their empire, attacked by the Hittites and Assyrians, finally disappeared in the 13th century BC.

Peter Pfälzner says: “ The fact that unfired clay cuneiform tablets have survived for so many decades under water is a miracle “. Hasan Qasim concludes: Excavation results show that the site was an important center of the Mittani Empire ».

In order to avoid additional damage to the ruins, caused by the water from the reservoir on the unfired clay walls, the excavated buildings were entirely covered with a plastic sheet which itself was covered with gravel. This conservation measure is funded by the Gerda Henkel Foundation, seeking to promote science in universities and research institutes. Currently, the site is completely flooded again.