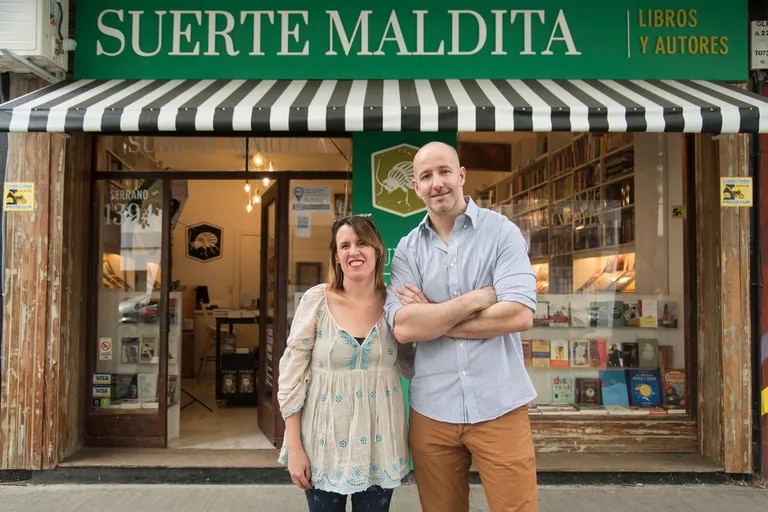 In a note published in the American newspaper The New York Times (NOW), signed by its correspondent in the Southern Cone, the journalist Daniel Politi, states that, despite the recession and the pandemic, the book business is prospering in the city of Buenos Aires thanks to the small independent bookstore boom. “Happy that my latest story for the NY Times is truly a love letter to Buenos Aires’ rich cultural scene that somehow manages to thrive amid seemingly endless economic woes,” the author wrote on his Twitter account. . Against all odds, Buenos Aires continues to defend its international record as the city with the most bookstores per number of inhabitants.

The article brings together testimonies from booksellers such as Carime Morales, from Malatesta (in Parque Chas); Luis Mey and Ana López, from Suerte Maldita, (in Palermo); Nurit Kasztelan (from the virtual bookstore Mi Casa, in Villa Crespo), Cristian Di Nápoli, from Otra Orillas (in Recoleta), and Cecilia Fanti, from Céspedes, in Colegiales; editors such as Víctor Malumián (co-editor of Godot and co-organizer of the Editors’ Fair) and Damián Ríos (of Blatt & Ríos), and consultant Fernando Zambra, director of Promage. Those consulted highlight that, due to the restrictions imposed by the pandemic in the country, neighborhood bookstores obtained a comparative advantage over large chains when they were allowed to sell online and on social networks.

“Porteños confined to their neighborhoods for much of 2020 turned to small nearby bookstores,” Politi writes, quoting Fanti’s words below: “The bookstores do not stop opening.” However, and simultaneously, they did not stop closing either. In 2021, among others, the Antígona, Los Argonautas and Librería de las Luces bookstores on Avenida de Mayo, Las Mil y Una Hojas in Palermo and, on Corrientes Avenue, Mr. Hyde and Lorraine (although the latter remains open liquidating stock). The El Libro Foundation even launched a dramatic request in the middle of last year -titled “The wound does not stop bleeding”- with claims to the national government and the Buenos Aires government.

“The Corrientes Avenue scene, which reached its peak in the mid-1980s and 1990s, after the end of the Argentine military dictatorship, lost more luster as the center emptied and several large bookstores closed,” it reads in the article of NOW. Consulted by LA NACION, several booksellers in the area confirmed that since the end of 2021 they had returned to the sales level of 2019 (with the clarification that this had not been “a good year”). During the pandemic, the Government benefited publishers and bookstores for a few months with the Work and Production Assistance Program (ATP) and soft loans.

Publishers and booksellers point out in the note that neighborhood bookstores offer “thoughtful recommendations”, a kind of curatorship with titles from independent labels. “It is true that you can find absolutely everything on the Internet, but you will only find what you know you are looking for,” reflects Malumián, editor of Godot. For her part, Mey argues that the pandemic “leveled the playing field with the big monsters” who relied more on foot traffic and casual readers. And according to Zambra, small bookstores help maintain the publishing business. There is no mention of the claim of the bookstore sector on the benefit of VAT relief from which they were excluded due to a (believe it or not) “writing error” in the AFIP regulations in the previous government and that the current one has not yet amended. In the coming weeks, the Argentine Book Chamber will release the 2021 sales report.

“We have the same books as everyone else, but the key is that we don’t exhibit the same books,” says Ana López, Mey’s partner in Suerte Maldita. And she adds that if someone asks for “the latest best seller I can get it for them, but it is not what I choose to expose, which includes a lot of small publishers.”

“We talked with Politi for almost an hour and a half on the phone -Kasztelan told LA NACION-. I told him that in the pandemic the bookstore exploded, to such an extent that it was difficult for me to sustain the demand of people wanting to read. On the one hand it was beautiful, feeling useful again, dealing books with the neighbors of the neighborhood in China, making us go out to buy milk, that people gave books to their loved ones, that reading saved a certain helplessness that the scene had generated. Then I myself had to put a handbrake on the scene, because I saw myself working from Monday to Sunday almost 24 hours a day, and I could barely cope with reading, which was the main reason why I decided to dedicate myself to this. And the bookstore returned to its normal operation: few social networks, personalized recommendations and on shift, and a lot of word of mouth.

See also  Wouldn't it be difficult to go down to the public garden in a snowstorm?

The director of the Center for Public Book Studies and Policies, Alejandro Dujovne, affirms that “this kind of article, in highly prestigious international media, contributes to reinforcing Argentina’s place in the competitive world map of letters, although, by focusing on the experience of Buenos Aires or, rather, of some neighborhoods of Buenos Aires, it carries the risk of turning the part into everything, making us lose sight of the structural political and economic problems that prevent a more federal, democratic and lasting development of the world of books and reading in our country”. In the recent report prepared by Dujovne and his team for the Regional Center for the Promotion of Books in Latin America and the Caribbean (Cerlalc-Unesco), “The book ecosystem in Ibero-America, a state of the art”, the ” challenges faced by the countries of this region, Argentina among them, to expand their markets, professionalize their practices, and move towards an increasingly integrated book space”. Click on this link to read the report.