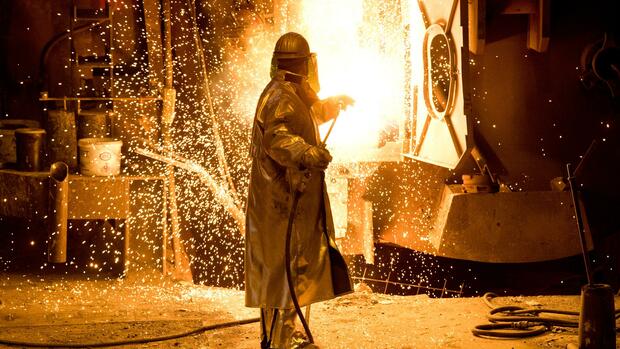 Berlin Problems in the supply chains and the increased demand as a result of restocking are causing costs for German companies to continue to rise. After the increase in energy prices in particular had a negative impact on the economy, preliminary products are now becoming increasingly expensive.

This is shown by the current business survey by the family business association, which is available to the Handelsblatt. According to the almost 800 companies surveyed, the purchase prices for primary products rose by 56 percent in April compared to the previous year. The increase in raw materials was 46 percent.

Companies also fear that price increases could continue. In particular, the emergence of a wage-price spiral could trigger this from their point of view – a danger that 89 percent of the companies describe as “large” or “very large”.

The phenomenon describes a development in which workers demand higher wages to compensate for the loss of purchasing power as a result of higher prices. This in turn increases the costs for companies, which pass them on to their customers in the form of price increases.

So far, however, such a wage-price spiral is not foreseeable. Most economists assume that wage growth will not be able to compensate for the loss of purchasing power. The federal government expects employee compensation growth of 5.1 percent in 2022, which would be exceeded by the projected inflation rate of 6.1 percent. But history has shown that such a development can occur suddenly.

“There is no doubt that higher wage demands will come if inflation stays this high for a long time,” said Isabel Schnabel, a member of the Executive Board at the European Central Bank, recently in the Handelsblatt. Although there is no sign of a mutual build-up of wages and prices, Schnabel explained: “We must not wait until a wage-price spiral has already started.”

>> Also read here: Tenants have to adjust to these additional energy costs

The first signs of this come from the steel industry. The board of directors of IG Metall announced on Sunday that it would demand wage increases of 8.2 percent in the forthcoming steel round. The warnings of a wage-price spiral should also be taken seriously because there are more major collective bargaining rounds this year.

The regional discussion of demands for the forthcoming collective bargaining round for around 3.9 million employees in the metal and electrical industry has already begun. In mid-July, the IG Metall board of directors wants to decide on the demand, and negotiations will start in September. “In view of the sharply rising prices and the continued high profits, colleagues expect more money in the long term,” said Daniel Friedrich, district manager of IG Metall Coast.

In the chemical industry, the bargaining parties agreed at the beginning of April on a one-time “bridging payment”, but want to negotiate a permanent wage increase again in October. At the end of the year, there is also a collective bargaining round for the approximately 2.7 million federal and municipal employees.

More: “We will do what is necessary” – ECB Director Schnabel announces a turnaround in interest rates.