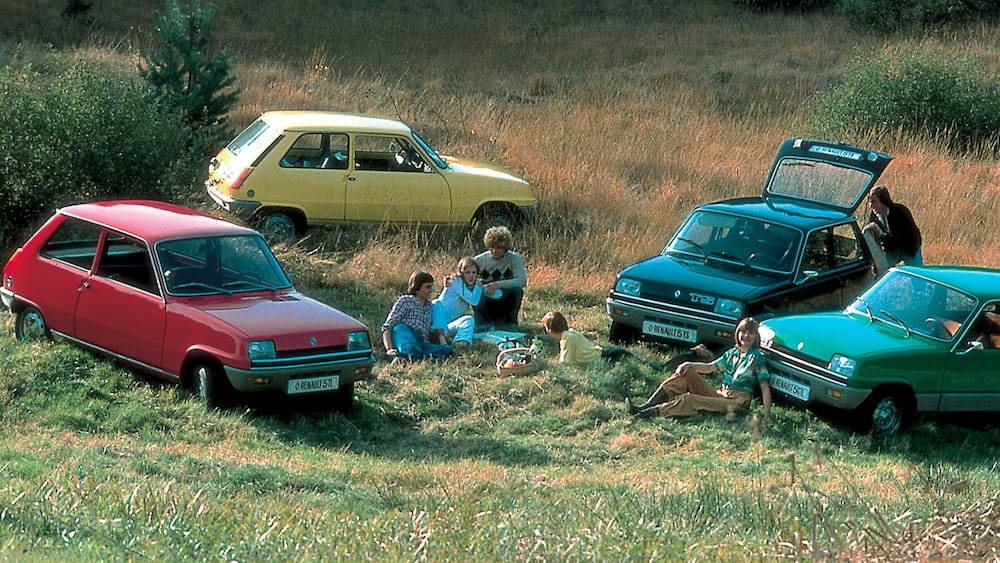 After the world premiere at the Geneva Motor Show in 1972, Renault sent its squeaky yellow, bright orange, sky blue or acid green painted R5 onto the streets – and hit the bull’s eye. The French small car is a real revolution and makes its competition look pretty old in one fell swoop.

The Renault 5 was originally only intended as a supplement to the Renault 4 and as a more modern and cheaper alternative to the larger Renault 6. But with its charming shape and city-friendly dimensions (only 3.51 meters long), it quickly gets into the hearts of a large fan base. In 22 years, by the end of production in 1994, 9,008,912 of the small cars that were initially advertised as “little friends” will be built and sold worldwide.

The large plastic bumpers can be seen for the first time on a production car when the new R5 is presented. They’re more than just a design gimmick. Are they more practical than the bumpers previously used and will soon become the new industry standard that the entire industry is adopting. Back then, the upright rear lights were also new – again, more for practical than aesthetic reasons. They allow the installation of the wide, deeply drawn-down tailgate and thus enable convenient loading and unloading of the trunk. It holds 215 liters, which is suitable for everyday use, and can be expanded to 900 liters by folding down the rear seat.

Motors for every requirement

Renault covers a wide range of engines. It ranges from the 1972 entry-level model with 34 hp to the Renault 5 Alpine Turbo with 108 hp presented in 1981. The Renault 5 Turbo, which was radically designed for rallying, widened by 20.2 centimeters (!) And rolled into the dealers’ showrooms in 1980, goes one better: Its 1.4-liter, built-in lengthwise behind the front seats instead of a back seat -Turbo engine with intercooler mobilizes an impressive 160 hp. Renault also launched the four-door R5 with six centimeters longer wheelbase for the first time, which boosted the already good sales figures again. In 1980, more than 660,000 R5s left the factory – around 45 percent of total Renault production.

Renault 5 Prototype: Looking back ahead

The end of production of the Renault 5 in 1994 is not a farewell forever: at the beginning of 2021, Renault CEO Luca de Meo (54) presented the Renault 5 Prototype study. With its shape, it cites the cult car of the same name from the 1970s and 80s, but with the planned electric drive, it also provides a glimpse into the future. The series-production electric vehicle derived from this prototype is due to hit the market in two years’ time in 2024 – continuing the history of the successful R5 and bringing it into the modern age.

The end of production of the Renault 5 in 1994 is not a farewell forever: at the beginning of 2021, Renault CEO Luca de Meo (54) presented the Renault 5 Prototype study. With its shape, it cites the cult car of the same name from the 1970s and 80s, but with the planned electric drive, it also provides a glimpse into the future. The series-production electric vehicle derived from this prototype is due to hit the market in two years’ time in 2024 – continuing the history of the successful R5 and bringing it into the modern age.

After 5,544,695 R5s were produced, a completely redesigned successor was launched in 1984 with the “Supercinq” (Super-5). Its design is based heavily on its predecessor, but appears smoother and more mature. In length, the three-door 5 Series has increased by 8.5 centimeters to a still compact 3.59 meters. The five-door is another six centimeters longer. Despite all the similarity, there are still fundamental differences to the predecessor. For example, the 41 to 115 hp engines are installed transversely in front of the front axle instead of longitudinally behind it for more space in the interior.

I was also fascinated by the little Frenchman at a young age, especially his sporty offshoots. A not completely fresh, but well-run-in first-generation R5 Alpine with 1.4 liter displacement, 93 hp and pretty special rims has to serve for my first attempts at racing on the country road. I quickly learn to deal with the front-wheel drive, which becomes insidiously light at brisk speeds on the front axle. One of my buddies seems to be less experienced – his double somersault in a long right-hand bend with my R5 Alpine goes off lightly for him, but it means the end for my darling.

It was almost enough for a racing career

Long in love with the little French, a replacement must be found immediately – a R5 GTE Blue Special of the late second generation with a 1.7-liter naturally aspirated engine, catalytic converter, 95 hp and significantly more comfort than the old Alpine. With the little R5 I get my racing license and also drive one or two races at the Hockenheimring. But soon the next family members, always clammy finances and regular Sunday services at the editorial office prevent the continuation of my racing career, which is not particularly promising anyway …

But this does not detract from the love for the brand and especially for the “little friend”. And so I am especially happy about the 50th birthday of the Renault 5 this year.