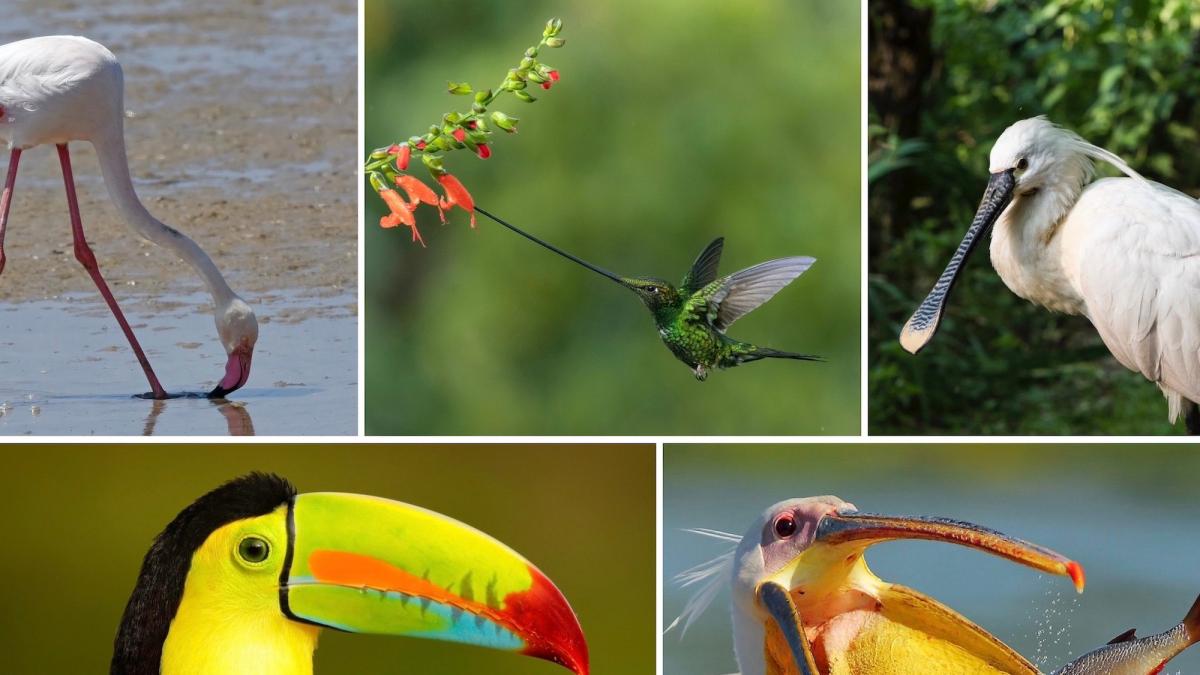 5 strange bird beaks and what they are for

Surely for many birds are fascinating creatures. One of the aspects that arouses the most curiosity is the variety of shapes that the beaks of these creatures take on. There is a strong discussion about the relevance of natural selection related to feeding on the final shape of the bird’s beak.

For some researchers, like Aaron M. Olsen of the University of Chicago, feeding is the main selective force in the diversification of bill shapes, especially in waterfowl. To Sam van Wassenbergh and Simon Backend, from the University of Antwerp, the relationship is not as strong as it seems. And for the team Guillermo Navalón, from the University of Bristol, the diet would explain less than 12 % of the variation in the shape of the beak; according to his research, similar beak shapes are associated with very different diets.

There is the possibility that the shape of the beak is more related, then, with the compensations and limitations that occur from the genetic point of view, than with the diet itself, and that the ways of feeding are a consequence, and not a cause. , of the shape of the beak. That is to say, that the different birds find the best way to get food according to the shape of the beak, and not the other way around. Whatever the correct explanation—a discussion that will only be resolved by the scientific method—the truth is that many birds have exceptional beaks that give them unique abilities to feed.

The pelican, a storage sack

When we talk about exceptional peaks, the pelicanIt is one of the first birds that comes to our mind. With a length of between 40 and 45 cm, the beak of the pelican is one of the largest in the world. But it is not only exceptional for its size, but also for its features.

The upper jaw is long, thin, and ends in a hook, a feature it shares with other fishing seabirds, which helps it hold on to its prey. But the most interesting is the lower jaw. The lateral branches of the bill are thin and flexible, allowing it to spread laterally. Below, a large bag, called throat sac, turns the huge beak of this animal into a kind of fishing net to catch fish. In the case of the brown pelican (Pelecanus occidentalis), one of the smallest species, it has been calculated that its gular sac can dilate up to a capacity of eight to twelve liters of water. Four times more than the animal itself weighs.

Once the fish is captured, the pelican closes its beak, relocating the lateral branches of the lower jaw to their original position thanks to strong muscles and, before taking flight again, it empties the gular sac of water, keeping it inside. fish.

If the pelican’s bill is the largest in absolute terms, the bird with the longest bill relative to its length is the hummingbird. Specifically, the sword bill hummingbird (ensifera ensifera). An average specimen measures between 21 and 26 cm in total length, of which between 8 and 12 cm corresponds to its beak.

The sword-billed hummingbird is highly specialized in consuming nectar. Its beak, like that of other hummingbirds, forms a suction tube with which it manages to reach the bottom of deep flowers such as Jimson weed, fuchsia or passion flower, where the nectaries are found; although occasionally, it also feeds on insects that it hunts by opening its long, fine and delicate beak.

The toucan, a beak with serrated knives

Although not as large as that of the pelican, the beak of the toucanit also draws attention for its large size, up to 20% of its total length. The vivid and striking coloring It is a sexual claim, but the most fascinating thing about the toucan’s beak is hidden in its structure.

In general, the beak of birds is made up of keratin, the same protein that makes up our hair or nails. However, the toucan’s beak, significantly more resistant Like the beaks or claws of other animals, it has an internal sandwich-like structure, with two outer layers made up of keratin scales superimposed on each other, and an internal core formed by a fibrous and intricate red of collagen.

See also  The late artist Nour al-Sharif could not stand seeing his mother's face and refused to shake hands with her.. You will not believe what she did to him to make him hate her!! (exciting details)

The tip of the beak is characterized by its great precision, which allows you to hold fruits or seeds, even small in size. To consume larger food, the toucan uses the edges of the bill, sharp and serratedto break them into smaller pieces that you can eat.

The spoonbill and its namesake beak

Another large beak is that of the spatula (Platalea leucorodia); with a cylindrical shape that flattens and flares at the end, giving it the appearance, as the name suggests, of a spatula. Thanks to this peculiar shape, the bird can search prey in silt and mud.

The Spoonbill feeds exclusively on live prey, mainly small fish, crustaceans and insect nymphs They live at the bottom of calm or stagnant water. To capture them, it inserts its beak into the water and moves it, slightly open, from side to side, either on the surface or on the bottom, stirring up the sediment.

Initially it was thought that the Spoonbill moved erratically looking for prey randomly, but today we know that, in reality, these feeding behaviors optimize efficiency. The spatula presents sensory receptors in beak that detect their prey accurately, even when the turbidity of the water does not make them visible. In addition, it actively selects the prey, discarding those that are unappetizing or too small, but the moment it touches the right prey, it catches it with a quick movement.

The flamingo and its strainer beak

The peak of the flamencoit is much smaller than previously described, but it is perhaps one of the most complex. has an angular shape, with the proximal region—the one adjacent to the head—horizontal and the end inclined downwards. When the animal puts its head in the water, looking down, it is the final part of the beak that remains horizontal.

The beak is very sensitive, and allows easy and precise detection of its prey, especially shrimp. The flamingo opens its beak and, with a flick of the tongue, generates a suction current with which it captures its prey. Then he partially closes his mouth, and pushes again with his tongue to let the water escape between some bristles that it presents on the edge of the beak, similar to those of a whale —in a clear evolutionary convergence—. It is retained in the filter anything greater than 0.5mm, including flamingo prey. The system has been described as a two-way pump filtration —entrance and exit of the water—, which differentiates it from any other filter-feeding bird.