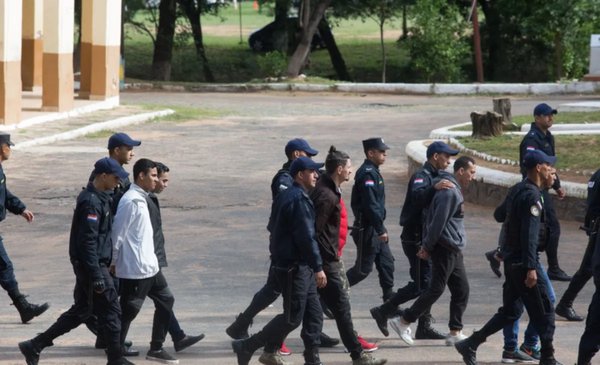 35 prisoners belonging to a Brazilian criminal mega-organization escaped on Sunday afternoon from the Misiones prison, in southern Paraguay, after carrying out a riot and reducing several prison guards. They fear they may head to the border with Argentina.

Among those who escaped are the leaders of this criminal group originating in Brazil, which three years ago staged what was called the San Pedro massacre, when PCC members slaughtered 10 prisoners from a rival clan inside a prison.

The Deputy Minister of Criminal Policy of Paraguay, Alberto Daniel Benítez, explained that the security forces that were deployed in the area managed to recapture 28 prisoners who escaped from the prison.

“We do not rule out that they have gone to the border area” with Argentina, Benítez warned La Nación. The Misiones penitentiary, where the PCC prisoners were housed, is located about 100 kilometers from Itá Baté, opposite Itatí, Corrientes. .

The lack of controls on the river border between Paraguay and Argentina made this hypothesis grow, because there is also permanent informal traffic in that area, which favors smuggling and drug trafficking.

Benítez said that among those still at large are two PCC leaders, Edilson Silva Da Cruz and Víctor Manuel Roa, who at the end of last July were convicted of the so-called San Pedro massacre, where members of this criminal group performed baptisms of blood in that prison and they cut the throats of ten members of the Rotella clan, a Paraguayan drug organization.

Benítez warned that during Sunday afternoon a riot began in the Misiones prison, where after incidents occurred, the prisoners reduced two prison guards, disarmed them, and took over pavilion C of the prison.

Then, they escaped by jumping the walls and barbed wire. They took refuge, at first, in a mountain area near the prison, where it was difficult to identify the fugitives with the helicopter that carried out the patrols.

WHO ARE THESE CRIMINALS

The massive escapes of PCC prisoners are a characteristic of this criminal group, which was born in 1993 in the San Pablo prison, and today is in a period of expansion to other countries in the region, such as Bolivia, Uruguay and Argentina.

Currently, this criminal group, which expanded in the pandemic and is accused of having ordered and financed the crime of Paraguayan anti-drug prosecutor Marcelo Pecci on a Colombian beachbegins to gain a foothold in Argentina and Uruguay from the logistical control of a key route to supply the Old Continent with cocaine: the Paraná-Paraguay Waterway, which has few controls, which favors a multimillion-dollar business.

The alerts came on because this organization, which is fundamentally financed by drug trafficking –with which it raises 500 million dollars per year, according to the São Paulo Public Ministry–, has a very fast expansion power inside the prisons, as confirmed by the experiences of Brazil.

They dominate the penitentiaries of 20 of the 27 Brazilian states and there are an estimated 40,000 members. In Paraguay they have 1500 “baptized”.

The organization takes advantage of the poor conditions of detention to “loyalty” the inmates, to whom they offer a salary and help their families, and also the cracks left by corruption inside the prisons, a feature that in Argentina is It shines through with the criminal activities detected inside the prisons, especially in Santa Fe, as a report from the Narcocriminality Attorney’s Office (Procunar) warned last September.

PCC members who achieve freedom, by serving their sentences or escaping from prison, finance escapes from penitentiaries through a collection system among the members of the narco lodge.

With information from the Nation