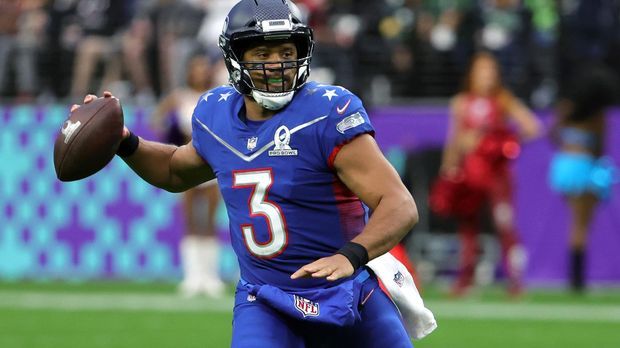 Munich – In the night from Thursday to Friday, the NFL announces the complete schedule for the coming season.

According to a leak by US sports reporter Ari Meirov, the Los Angeles Rams are scheduled to open the NFL season against the Buffalo Bills on September 8th.

This would be the start of the duel between top quarterbacks Matthew Stafford and Josh Allen. Also, it would be Von Miller’s return to Los Angeles. In the offseason, the defensive star switched from the Super Bowl champ to the Bills.

That would be awesome to start the season! The Denver Broncos are said to be taking on their new quarterback Russell Wilson on the first day of the game with the Seattle Seahawks. This is reported by various US media, citing Denver-based sports journalist Vic Lombardi from “Altitude Sports”.

That would mark the big return for the star quarterback, who joined the Broncos in the offseason after more than a decade with the Seahawks.

In all likelihood, the game will be scheduled for the Monday Night Game in the USA, i.e. in this country on the night from Monday to Tuesday.

You can find out the complete schedule for the coming season LIVE tonight on the NFL network stream at ran.de (HERE DIRECTLY TO STREAM). In less than four hours, the broadcast will begin on the so-called Schedule Release Day on the NFL Network.

And on we go: In week four, the Tampa Bay Buccaneers meet the Kansas City Chiefs.

The game will be the game day’s “Sunday Night Game” and will be televised on NBC. It’s the rematch of the 2021 Super Bowl

The Philadelphis Eagles open their season against the Detroit Lions led by Amon-Ra St. Brown.

Only a few hours until the full schedule for the 2022 NFL season is announced. A big show is also planned for this, in which ranNFL expert Björn Werner is also involved.

You can follow that announcement LIVE on the NFL Network stream at ran.de (HERE DIRECTLY TO STREAM). Tonight from 2 a.m. German time, the transmission begins on the so-called Schedule Release Day on the NFL Network.

The next game of the NFL schedule for the coming season is known: In week ten, the Dallas Cowboys travel to Wisconsin with quarterback Dak Prescott to the Green Bay Packers and back-to-back MVP Aaron Rodgers.

The game will take place at a later kick-off time at 10:25 p.m. German time, broadcast by the “FOX” station.

Earlier on the same day, the NFL premiere will take place in Germany when the Tampa Bay Buccaneers duel with the Seattle Seahawks in Munich’s Allianz Arena.

As the NFL announced, the game between the Los Angeles Rams and the Denver Broncos will take place on Christmas Day in the USA, i.e. December 25, 2022, at 10:30 p.m. German time.

Both “CBS”, one of the rights holders, and the children’s channel Nickelodeon transmit. In the past two years there has already been a playoff game with a broadcast that is aimed specifically at children and explains, for example, the complicated rules and penalties.

For Russell Wilson it will be the first return to Los Angeles, the Rams are known to play in his old division, the NFC West.

The following games of the NFL game plan 2022 are already fixed:

Right at the start of the season, NFL fans can expect a “double header”, i.e. two games, on the night from Monday to Tuesday. The Tennessee Titans take on the Buffalo Bills and the Philadelphia Eagles take on the Minnesota Vikings. Three of the four teams were in the playoffs last season.

The NFL has already announced all dates for the international games.

On the tenth day of play, the Seattle Seahawks and the Tampa Bay Buccaneers travel to Germany to play at the Allianz Arena.

The New Orleans Saints take on the Minnesota Vikings on Day 4 at Tottenham Hotspur Stadium, and a week later the Green Bay Packers host the New York Giants for a repeat of the 2016 playoff game.

On the eighth day of the game, a well-known team will return to England for the Londoners, the Jacksonville Jaguars will host the Denver Broncos at Wembley Stadium.

Not only in Europe is played, but also in Mexico. In the neighboring country of the USA, the Arizona Cardinals are playing a home game. After a two-year hiatus, the San Francisco 49ers will take on the Cardinals at the Estadio Azteca in Mexico City. The game rises to Day 11 and will be a prime time game on Monday night US time.

“Thursday Night Football” starts on the second day of the game. The Los Angeles Chargers and Kansas City Chiefs are the first. Both teams are hoping for a playoff participation in the coming season and have impressed with their young, talented quarterbacks in the past.