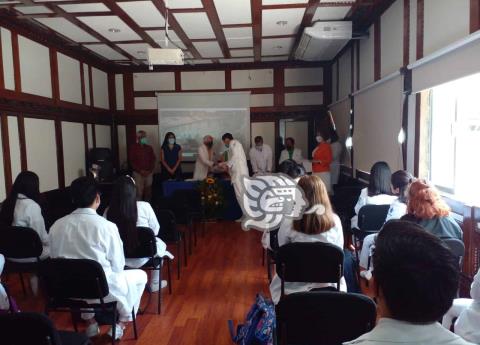 fourteen students of the School of Medicine from Veracruz University received a congratulations from the vice-chancellor in the Córdoba-Orizaba area, Mario Roberto Bernabe Guapillo Vargasafter obtaining laudatory notes with an average of 10 absolute.

“Surely they will contribute a lot in building better communities. I want to congratulate them for the enthusiasm they put into each of their academic activities, for taking advantage of every resource destined for their training, the one that their family and also the Mexican people contribute in the form of education. public higher education through our highest house of studies”.

He pointed out that in all of them there is the hope of health for those who need it, and extended his congratulations to those who have accompanied them on their journey, such as their father, mother, and without a doubt it will be one more laudatory note of the many that they will receive.

For his part, the director of the School of MedicineAlejandro Pimentel Domínguez, mentioned that these recognitions represent that approximately 20 percent of the students are obtaining grades above nine, which represents an effort from them but also from the academics and even from the families, since they achieved that in this pandemic there was a suitable space in the house.

See also  National Institute of Pediatrics, with 2 doctors in the emergency room at night: SFP

He recalled that as of the month of May, 75 percent of the students are already in face-to-face classes and in the remainder of the month almost 90 percent will return.