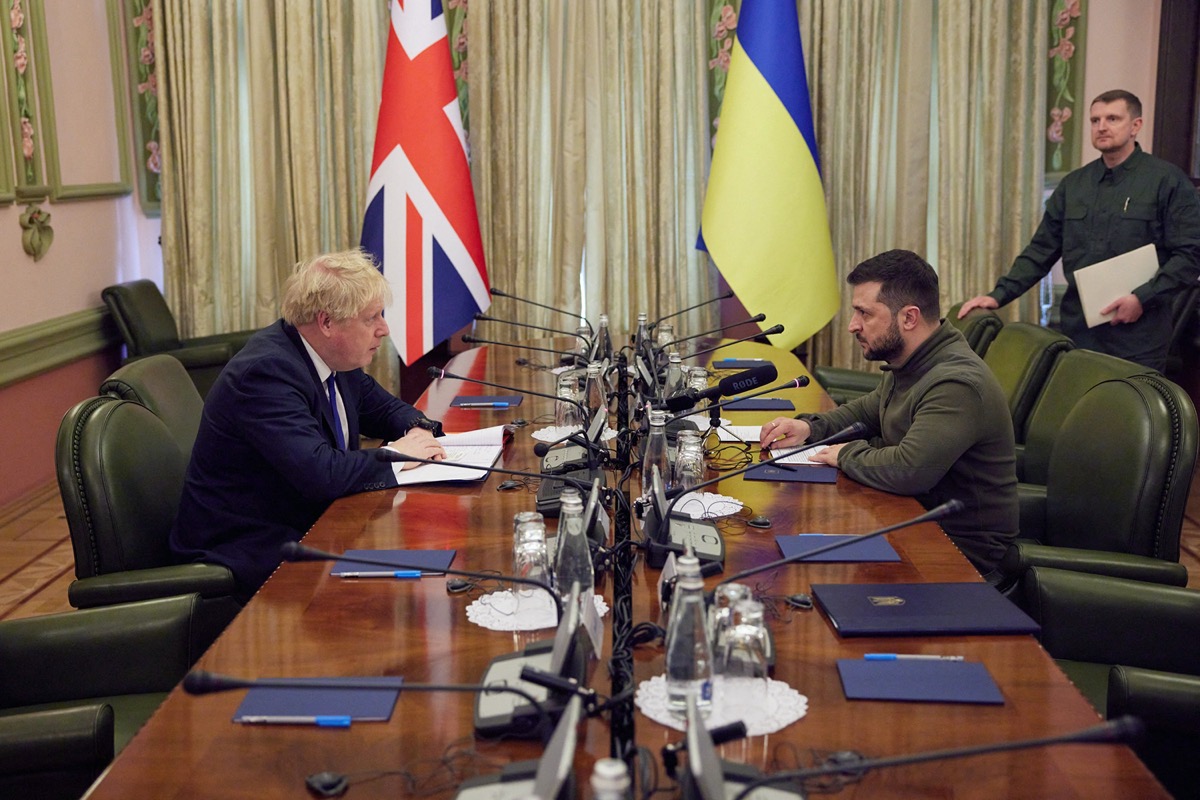 In the aftermath of the missile strike on the Kramatorsk station (Eastern Ukraine), which left at least 52 dead, including five children, on Friday April 8, Emmanuel Macron announced that he wanted to “gather evidence” against “war crimes of the Russians”. Follow the latest information live.

British Prime Minister Boris Johnson, on a surprise visit to Ukraine on Saturday, and Ukrainian President Volodymyr Zelensky walked together in the streets of kyiv, several neighborhoods of which were bombed by Russia, the press service of the presidency said.

In a video released by the presidency, the men, apparently without protective equipment, can be seen walking around the neighborhood where the presidential administration is located.

A passer-by, visibly moved to see the British Prime Minister, told him: ‘I love the UK so much. He saved us (…) My children and grandchildren will remember it! We need you very much. Everyone knows that,” he said, presumably referring to British military assistance delivered to kyiv.

Five people were killed and five others injured on Saturday in Russian shelling in eastern Ukraine, which expects a major Russian offensive in this territory, the regional governor said on Telegram in the evening.

“Today five people died as a result of Russian strikes in the Donetsk region. (…) Five other people were injured,” said Pavlo Kyrylenko.

Ukraine announced on Saturday that it had carried out a “third exchange” of prisoners with Russia since the start of the Russian invasion, allowing the release of 12 Ukrainian soldiers and 14 civilians.

“By order of President Volodymyr Zelensky, a third prisoner exchange took place today. Twelve of our soldiers, including a female officer, are returning home. We also allowed the release of 14 civilians, including nine women, making a total of 26 people,” Ukrainian Deputy Prime Minister Iryna Vereshchuk wrote on Telegram.

The atrocities committed in Buchha, a small town near kyiv where many bodies of people dressed in civilian clothes were found after the withdrawal of Russian troops, have “permanently tarnished” the reputation of Russian President Vladimir Putin, the Prime Minister said on Saturday. British Minister Boris Johnson.

“What Putin did to Boutcha and Irpin are war crimes and have permanently tarnished his reputation and the representation of his government,” he blasted at a press conference after the meeting. a surprise visit to kyiv where he met Volodymyr Zelensky.

Ukrainian President Volodymyr Zelensky on Saturday called on Western countries to follow Britain’s lead on military support for Ukraine and sanctions against Russia.

“Other western democratic states must follow the UK’s example,” he said alongside British Prime Minister Boris Johnson, who has pledged to provide kyiv with armored vehicles and anti-ship missiles.

British Prime Minister Boris Johnson, visiting kyiv on Saturday, pledged to supply Ukraine with armored vehicles and anti-ship missiles, paying tribute to the Ukrainian military for “the greatest feat of arms of the 21st century”.

“It is thanks to the unwavering leadership of President Zelensky and the invincible heroism and courage of the Ukrainian people that the monstrous designs of (Vladimir) Putin are foiled,” Boris Johnson said after his meeting with Volodymyr Zelensky, according to a statement. of his services.

British Prime Minister Boris Johnson began a surprise visit to Kyiv on Saturday with a one-on-one meeting with Ukrainian President Volodymyr Zelensky, the first G7 leader to visit Ukraine since the Russian invasion began on February 24. .

“Today I met my friend President Zelensky in Kyiv to show our unwavering support for the Ukrainian people,” Boris Johnson tweeted after the meeting.

Today I met my friend President @ZelenskyyUa in Kyiv as a show of our unwavering support for the people of Ukraine.

We’re setting out a new package of financial & military aid which is a testament of our commitment to his country’s struggle against Russia’s barbaric campaign. pic.twitter.com/KNY0Nm6NQ3

“We are putting in place new financial and military aid that demonstrates our commitment to his country’s fight against Russia’s barbaric campaign,” he added.

On President Zelensky’s Telegram channel, there are several photos of him, wearing a khaki outfit and sneakers, welcoming the British Prime Minister in a suit and tie outside the presidential headquarters in Kyiv and inside.

“Welcome to kyiv, my friend!” he wrote.

An official from Mr. Zelensky’s cabinet had posted a photo on Facebook earlier showing the two leaders chatting, seated around a table, announcing the prime minister’s visit.

“The United Kingdom is the leader in military support for Ukraine, leader of the anti-war coalition, leader of sanctions against the Russian aggressor,” wrote Andriï Sybyga, deputy head of the Ukrainian presidency.

The world has finally pledged 9.1 billion euros as part of the campaign (Stand up for Ukraine, editor’s note) (…) In addition, the Commission, in collaboration with the EBRD, is adding an additional billion for people displaced in Ukraine. “It’s fantastic. So 10.1 billion euros,” said Ms. von der Leyen.

British Prime Minister Boris Johnson is in kyiv on Saturday in a show of “solidarity” with the Ukrainian people, Downing Street announced.

Mr Johnson traveled to Ukraine “to meet President Zelensky in person, in a gesture of solidarity with the Ukrainian people” and is to “present a new package of financial and military assistance there”, a spokesman said. of the services of the British Prime Minister.

In a new statement, President Volodymyr Zelensky assured that Ukraine is “always ready” for talks with Russia

Russia on Saturday promised retaliation after the shutdown of the YouTube account of the lower house of the Russian parliament, raising the possibility of a blockage in Russia of the video platform of the American giant Google. Duma Speaker Vyacheslav Volodin claimed that the blocking of “Douma-TV” was a Washington measure that violated “the rights” of Russians. “The United States wants to have a monopoly on the dissemination of information,” he said on his Telegram account.

“We cannot allow this.” AFP journalists in Moscow found that the account in question was no longer accessible on YouTube on Saturday.

According to Google, the channel was shut down due to recent sanctions announced by the US government.

More than 4.4 million Ukrainian refugees have fled their country since the invasion ordered by Russian President Vladimir Putin on February 24, according to figures from the High Commissioner for Refugees (UNHCR). The UNHCR counted exactly 4,441,663 Ukrainian refugees on Saturday. These are 59.347 more than during the previous score on Friday. Europe has not seen such an influx of refugees since the Second World War.

Some 90% of those who have fled Ukraine are women and children, with the Ukrainian authorities not allowing the departure of men of military age. According to the UN’s International Organization for Migration (IOM), around 210,000 non-Ukrainians have also fled the country, sometimes encountering difficulties in returning to their country of origin.

The UN also estimates the number of internally displaced people at 7.1 million, according to IOM figures released on 5 April. In total, therefore, more than 11 million people, more than a quarter of the population, have had to leave their homes either by crossing the border to reach neighboring countries, or by finding refuge elsewhere in Ukraine.

Germany has almost exhausted its possibilities of supplying Ukraine with equipment drawn from the reserves of its army, the Bundeswehr, but is working on deliveries made directly by the armaments industry, the German Minister of Defense said on Saturday. Defense, Christine Lambrecht. “For deliveries from Bundeswehr stocks, I must honestly say that we have reached a limit in the meantime,” the minister told the Augsburger Allgemeine newspaper.

The German army must maintain its capacity for action and be able to “guarantee the defense of the country and of the Atlantic Alliance” (NATO), she added.

Evacuations of civilians continued on Saturday morning by road in Kramatorsk, in eastern Ukraine, the day after a missile strike at a train station that killed more than 50 people.

Mini-buses and vans came to pick up dozens of survivors of the bombing who spent the night in a Protestant church in the city center, not far from the station, AFP journalists noted.

Financial ratings agency S&P Global Ratings on Saturday downgraded Russia’s rating for foreign-currency payments to “selective default” level, after Moscow settled a dollar-denominated debt in rubles at the start of the week.

The rating of the agency, for payments in foreign currencies such as the dollar, is lowered to “SD”, while the rating remains at “CC” for payments in rubles, according to a press release from the agency, which also announces immediately stop its ratings on Russia, in accordance with the requirements of the European Union.

It is only one notch lower than SD in the scale of the agency: the note “D”, for default.

“This is another Russian war crime for which everyone involved will be held accountable,” Ukrainian President Volodymyr Zelensky said in a video message after a deadly bombing of a train station in eastern Ukraine. Ukraine, in Kramatorsk, where civilians were gathered to flee the region for fear of a Russian offensive, a massacre that sparked strong Western outrage. “World powers have already condemned Russia’s attack on Kramatorsk. We expect a strong global response to this war crime,” he continued.

The missile strike killed 52 people on Friday, including 5 children, according to a latest report from local authorities.

“Russia will sink into economic, financial and technological decay, while Ukraine is marching towards a European future,” European Commission President Ursula von der Leyen told a news conference in Kyiv with the President. Ukrainian Volodymyr Zelensky. “I am deeply convinced that Ukraine will win this war, that democracy will win this war,” she said.

Before that, Ms. von der Leyen, accompanied by the head of European diplomacy, Josep Borrell, had gone to Boutcha, in particular to see the mass graves dug to bury the dozens of civilians killed there. The Austrian Chancellor, Karl Nehammer, must also go to Boutcha on Saturday, as well as to kyiv.

See also  7.9 tons of cocaine discovered in the port